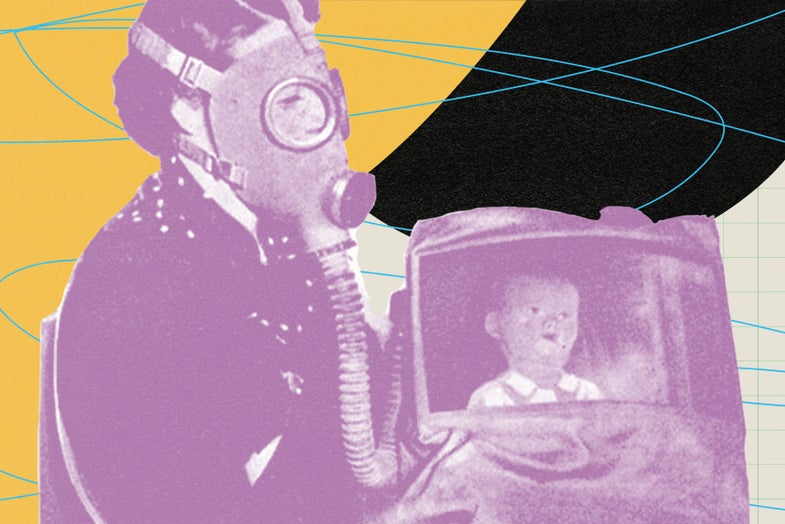 This post has been updated. It was originally published on October 2, 2017.

There are certain areas of expertise that came naturally to the editors of Popular Science over the years: cars, space, aviation, and computers, to name a few. During the first half of the 20th century, we even provided practical features for scientifically-minded housewives. But children and babies? Not so much. Hence this compilation of the most dubious child-rearing technologies from the pages of Popular Science.

We’ll be honest: As fond as we are of the crackpot inventions that have popped up on our pages over the years, we’re not in the least bit surprised that most of the devices in this gallery never took off. At least half of them were made for the benefit of adults, rather than for infants, so in retrospect they look comically misguided. A motorized baby hammock suspended by wooden beams, for instance, looks more like a swinging jail cell than a cradle, while a UV lamp used for branding newborns in the hospital probably drew inspiration from a cattle prod. Then there’s the baby can—literally a perforated can with a lid for storing babies on passenger trains. At the same time, we meant well with the hooded baby gas masks and the baby sleeping porch, a compartment you could install outside the window (and 100 feet above ground) to give your baby fresh air.

A baby porch suspended a hundred feet above ground? What could possibly go wrong? As city populations grew, people grew concerned about raising young children in tight spaces. Inventors suggested the miniature sleeping porch, which could be installed outside any window. The device seemed sturdy enough—an iron brace enabled it to carry 500 pounds of weight, while anchors protected the porch from strong winds. The compartment’s barred windows and netting kept the baby from climbing out (and bugs from flying in), and as the image shows, it was roomy enough to hold a tiny carriage “so that the effort of the mother in taking the baby in and out is reduced to a minimum.” Devices like these were actually quite popular for a time. You can learn more about “baby cages” here.

Like most new parents, Sheldon D. Vanderburgh, an inventor from Hastings-on-Hudson, New York, felt exhausted from taking care of a constantly crying baby. The solution? A homemade baby hammock. First, Vanderburgh built a basket-like bed by fastening netting to round end pieces. After hooking the basket onto a wooden frame, Vanderburgh realized that his swinging cradle would be far more effective if it could rock itself. He assembled a clock-spring motor that could rotate a crank arm attached to the shaft, and behold: a self-operated hammock. As a bonus, the gentle ticking noise would soothe his baby to sleep.

Before babies irritated people on commercial flights, they disturbed the peace on passenger trains. “We have been hoping for years that some intelligent inventor would come along with a device to can obstreperous infants during the late hours of the night,” Popular Science wrote. “We suggested a hermetically-sealed can wrapped in sound-proof material, but Caleb M. Prather, of Evanston, Illinois, who is the inventor of the can illustrated, sidestepped our instructions at several important points.”

Unlike those of us who clamored for dual baby silencer/holder, Prather designed his perforated baby can as a portable cradle, period. During waking hours, the baby could sit tight on the open holder. While asleep, the lid would be closed and the would breathe through the air holes.

Despite its convenience, Popular Science expressed annoyance that the invention yielded few benefits to surrounding passengers. “If the inventor will make his can air-tight and soundproof—features which we originally suggested—we know of a bachelor who will buy a half dozen right away.”

Evidently, rocking a baby is hard work because another inventor devised his own motor-driven cradle, which could run for two hours unattended. Like the Vanderburgh’s hammock, Luther P. Jones’ cradle used a clock mechanism to keep it going. As you can see from the illustration, though, Jones’ device could hold quite the load. The cradle hung on chains fastened to a metal frame, which would also keep the clock machine in place. To operate it, simply wind up the spring and watch as the motor turns a wheel. The motion would cause the bar holding the chain to swing, which would in turn rock the baby to sleep. The gears would also provide entertainment for the baby in case it woke up alone.

Memories of the Lindbergh baby kidnapping were still fresh during the spring of 1934—hence the black light baby alarm. Think of it like the high-tech laser alarms you see in heist movies. Concealed behind a curtain, the black light would focus on an electric sensor that would trigger an alarm if the barrier were breached. While a kidnapping detector certainly sounds well-intentioned, it was only a matter of time before parents decided they were uncomfortable with all of that machinery hidden beneath their baby’s mattress.

Want to bond with your baby over a recreational activity? Try the handlebar baby carriage. In retrospect, it looks a tad unstable, but its inventor, Emile Eberle of Geneva, Switzerland, evidently considered it safe enough for his child. The seat was fastened to the handlebars, while a metal supporting frame anchored the chair to the axle of the front wheel.

This full-body gas mask might look comical now, but with an imminent war looming, the threat of gas attacks was no laughing matter in 1938. The French-developed mask would enclose a baby in an airtight sack equipped with a rubber lung and filter unit. Whoever was holding the baby could control the amount of fresh air going in by pumping the artificial lung.

No one wants to go home with the wrong newborn, hence the invention of a ultraviolet branding tool that would burn a baby’s initials into their skin to prevent hospital mix-ups. The hand-held lamp would pass ultraviolet rays through stenciled initials, leaving pale marks that would fade away after a couple of weeks. Nothing says heartwarming like baby’s first sunburn.

Germany was a month away from invading Poland when Popular Science featured this baby gas mask, which was developed by a British designer after three years of research. Like the previous device, this one came with a filter and pumping unit controlled by the person holding the baby. The hood-like section of the mask was made of rubberized gas-proof fabric, while a cellulose window allowed the baby to peer at their surroundings.

Most parents teach their baby to walk by gently lifting them up by the arms, or by investing in a wheeled baby walker. One Swiss engineer, however, decided it’d be a better idea to strap wooden beams between his legs and those of his baby. That way, he could guide the toddler’s movements. Meanwhile, a harness attached to an overhead pulley would keep the child upright and balanced.

Leaving your baby unattended in the bathtub isn’t exactly safe, but when the doorbell rings or your other child starts wailing from the adjacent room, it’s tempting to check up on your other duties for just a second—what’s the worst that could happen? As any parent knows, plenty. Although most people would just holler at their spouse for help, Carl H. Fischer, an engineer from Iowa, built a small metal rod to anchor babies into the bus while mothers attended to various responsibilities. To use it, simply strap the baby into the harness and affix the rod to the sides of the bathtub. Rubber pads on the end hold it, and your baby, in place.